It’s been a few years since I moved from archaeology to information systems and libraries, but my head was so full of all the new things, I didn’t have much time to reflect.

Here’s a few things I’ve noticed, about the difference between the two professions.

At parties, when I say “I’m an archaeologist,” people say “Wow, like Indiana Jones!” 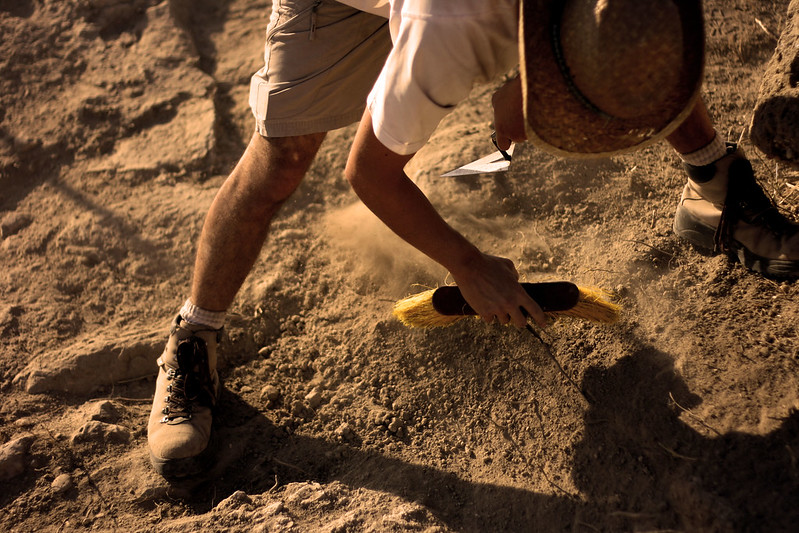 And when I say “I’m a librarian,” people say “Ooh, sexy librarian!”

Seriously. Librarians don’t even get a character name. When a woman moves from being an archaeologist to being a librarian, she moves from being identifiable with exciting male action heroes, to being a sexual object. There’s all kinds of cool discussions on gender in librarianship, but I was most interested to discover that I hadn’t realised how my field of study was giving me the kind of social capital usually reserved for men.

2. Everything costs more, and there is way more of it.

I don’t know if this is because a lot of mining companies employ archaeologists, or because there are just fewer archaeologists than librarians, or if it’s just a cultural expectation in the different fields of work. But I had some serious shock and horror when I saw the cost of entry to library professional associations, conferences and events.

Are there secret millionaire librarians out there? Do we just book nicer hotels for speakers at library events? I have a lot of difficulty understanding how a profession that generally earns LESS has all these events that cost MORE.

But, I’m going to a conference in July, so I’ll be comparing things in person, from the quality of the morning tea biscuits, to the venue and attendance numbers.

I… don’t get it. This person can do exactly the same thing I can. But they… don’t? Because I got a degree.

Nope, still don’t get it. My degree means I’ll have a better chance at getting hired, promoted, and published academically.

In archaeology, everyone and their dog can do pretty much everything, with experience and informal training. In the field, you use the hands you have.

So coming from that experience, to librarianship, it is very surreal. I don’t understand why everyone can’t just do the work. It’s not like somebody without a degree is going to white-out my name on my academic transcript, and waltz off with my qualifications and my social capital and my professional networks just because they did a job that needed doing.

It’s not even based on what we’re paid. I’m earning the same as some of these people, so in theory we’re all equals at the same level. I still can’t get my head around the professional/para-professional divide. Maybe it’s just one of those traditions that linger in different industries, like judges wearing wigs and barbers advertising with those twisty striped poles.

The joke in archaeology is that honours students pad out their theses, so that their very long and very specific titles can fit on the spines.

That’s not true! We just don’t like wasting space.

The joke in librarianship is that FRBR was supposed to supplant AACR2, and RDA is okay but when we’re still using MARC21 and LoCSHM and DDC23…

Yeah. I have moved from possibly the MOST verbose profession next door to philosophy (okay, fine, they were upstairs from us because we liked basement labs and they needed to see SOME sunlight, right?)

… and into one with more contractions than possibly even IT, because we add library-specific acronyms and standards on top of the everyday IT ones. When we can’t make an acronym, we truncate the words.

I obsess over this. Every field trip, every training session, every group event: Arnott’s family assortment. Archaeology is really just a series of intervals between the race for the nice biscuits.

In libraries, somehow, there are always Monte Carlos, and the orange creams. I don’t know how, I don’t know why. But I eat them, and oh it is good. Once, there were even Tim Tams and Fantales. And a coffee machine, instead of an urn and a big tin pot of Nescafe.

Morning tea is serious business in libraries, in my experience. Yum.

Today I post off-topic and discuss no books at all (except for films based on books).  Yes, in the Special Interest section of JB-Hifi Belconnen is an ‘Archaeology’ section.  Inside this section was:

Ong Bak 3 – third in a series of martial arts films in which a spiritual artefact of great value is stolen.  I’ve only seen Ong Bak 1, so I have no idea about the archaeological content of the film, but it seemed odd for ‘special interest.’

Egypt – a box set of a pretty, well-filmed documentary series, on Egyptology, which IS NOT ARCHAEOLOGY, even if you interview archaeologists as part of the whole thing.  This was actually the closest to archaeology in the section.

Several unofficial films describing the secrets behind The DaVinci Code film and book – I recall a classics faculty seminar on historical innacuracy in The DaVinci Code from my undergraduate degree.  I don’t remember there ever being any archaeology, since The DaVinci Code’s main (falsified at times) resources were documents, which makes this historical.

I’m a bit baffled.  If they established an ‘archaeology’ section, why not include box sets of Time Team, or put the historical DVDs into a historical section?  Did the employees at JB HiFi Belconnen classify these, or is there some idiot distributing cataloguer out there, tagging everything eagerly with ‘archaeology’?  I’m a little chuffed to see fiction being included, less happy about how none of the popular films about archaeologists seem to be shelved there (Indiana Jones, The Mummy, Tomb Raider, Stargate), and very unhappy about what was on the shelf.

Still, in the same way that the procedural crime shows I watch aren’t really made for forensic scientists, I bet the section of shelving and the shows held within weren’t really made with Archaeologists – or historians, Egyptologists, palaeontologists and martial artists – in mind.  Good for a laugh, though.